Brisbane is the capital city of the state of Queensland, Australia. The city's name is pronounced "BRIZ-buhn".  The City of Brisbane has around 940,000 inhabitants, while the surrounding metropolitan area population is around 1.73 million. 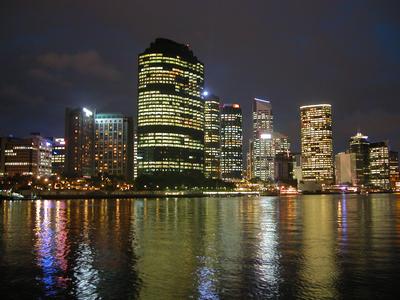 Brisbane is situated in the southeast corner of Queensland at latitude 27º28′S, longitude 153º02′E. The city straddles the Brisbane River, and its eastern suburbs line the shores of Moreton Bay. The greater Brisbane region lies on the coastal plain east of the Great Dividing Range.

Some of the major centres in greater Brisbane are:

Brisbane has a subtropical climate with warm, mild winters and hot, moist summers. Brisbane is subject to high humidity, mainly from November through to April.

Some of its historical extremes:

Brisbane has a diverse and generally vibrant economy with many sectors and industries represented in the city's total production of goods and services. Both white-collar and blue-collar industries are present, with white-collar industries such as information technology, financial services, higher education and public sector administration generally concentrated in and around the Central Business District and recently established office parks in the outer suburbs. Blue-collar industries such as petroleum refining, stevedoring, paper milling, metalworking and QR railway workshops tend to be located on the lower reaches of the Brisbane River and in new industrial zones on the urban fringe.

On 27 March 2004, former civil engineer Campbell Newman defeated incumbent Lord Mayor Tim Quinn in mayoral elections. Newman is a member of the Liberal Party and is only the second ever Liberal Lord Mayor of Brisbane.

The area of Brisbane city is split into 26 wards, which each elect a council member as a representative. The Lord Mayor is also elected by a popular vote, in which all residents must participate. Voting occurs every four years. Currently, the Labor Party has a majority of seats on Council, causing inevitable problems as the Labor-dominated Council and the Liberal Lord Mayor argue over policy.

The city is named after Sir Thomas Brisbane (1773–1860), British soldier and colonial administrator born in Ayrshire, Scotland. However before British colonisation, Brisbane was known as 'Meeaan-jin' by the Turrbul tribe. In 1823, the explorer John Oxley discovered the Brisbane River and in 1824, the first convict colony was established at Redcliffe Point. Only one year later, the colony was moved south from Redcliffe to North Quay on the Brisbane River, which is now part of Brisbane's CBD. In 1842, the area was opened for free settlement, while the convict colony was closed. By 1869 almost all of the Turrbul people had died. The few remaining survivors escaped the region with the help of the settler, Tom Petrie. When Queensland separated from New South Wales in 1859 and became a colony by itself, Brisbane was declared the capital, but it was not until 1902 that Brisbane was officially declared a city. In 1924, the City of Brisbane Act was passed, giving Brisbane a local government, which took up its work in 1925. During World War II, many US forces were stationed in the city, and it became the headquarters for General Douglas MacArthur, Supreme Allied Commander, South West Pacific Area.

Sights to see in the city's centre include Southbank Parklands (the site of Expo 88) and the recently developed Roma Street Parklands. There are a lot of shopping boutiques in Fortitude Valley and Queen Street Mall which has good shopping. The CityCat ferry service runs along the Brisbane River from the University of Queensland's Saint Lucia campus to Brett's Wharf at Hamilton, and is an easy way to get from one side of town to the other. Brisbane is also home to:

Brisbane is home of many traditional and modern landmarks, some of are Queensland icons and others resemble a great significance to specific heritage, sport or even residential standards. Here are some of Brisbane's finest buildings and landmarks.

Some buildings under construction, as of 2005:

Brisbane has a thriving performing arts culture, housed in theatres such as La Boite's Roundhouse Theatre in Kelvin Grove, the Optus Playhouse and Lyric theatre at Southbank, the Powerhouse in New Farm, the Brisbane Arts Theatre on Petrie Terrace and the recently opened "Judith Wright Centre" in Fortitude Valley.

South Bank Parklands is built on the former World Expo site and is famous for the firework displays it hosts at various times of the year. It is also a tourist attraction, featuring the beautiful Riverside Walkway and musical and arts festivals.

A number of tertiary education institutions have campuses in Brisbane, or in the surrounding areas: