Hobart is the state capital of Tasmania, Australia's island state.

Hobart is located on the estuary of the Derwent River in the state's south-east. The CBD is located on the western shore, adjacent to Sullivan's Cove, with the inner suburbs nestled into the hills at the foot of Mount Wellington (approximately 1270 metres high).

The suburban areas cover a significant amount of both the western and eastern sides of the river. Apart from the city, the suburbs are centred around Glenorchy (the northern suburbs) and Rosny (the eastern shore). The satellite town Kingston, south of the city, is fast becoming an outlying suburb of Hobart. Other surrounding towns such as Lauderdale and New Norfolk are popular residential areas for commuters.

Hobart has a mild, temperate, maritime climate with four distinct seasons. Being in the southern hemisphere, summer is December to February.

The City of Hobart (green) and Greater Hobart (teal) 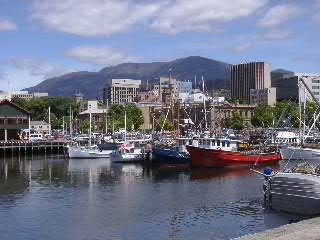 View from the port of the city centre and Mt. Wellington

The greater Hobart area today is covered by five local government areas - the City of Hobart, City of Glenorchy and City of Clarence, as well as a small part of Kingborough and Brighton municipalities.

The City of Hobart is governed by twelve aldermen, headed by the Lord Mayor of Hobart Rob Valentine. Councillors are elected biennially.

This picturesque little city is a busy seaport, notably serving as the home port for Australia's (and France's) Antarctic activities. It supports several other industries (notably including a high-speed catamaran factory and a zinc smelter) as well as a vibrant tourist industry. Visitors come to the city to explore its historic inner suburbs, to visit the weekly craft market in Salamanca Place, as well as to use the town as a base from which to explore the rest of Tasmania.

Other local attractions include the Cadbury factory, and for a day trip places like Port Arthur, and the tesellated pavement, the Huon Valley, the Tahune Forest Air Walk, Cockle Creek (the southernmost point reachable by car) and the walk to South Cape Bay Beach which also forms part of a 6 day walk to South Western Tasmania.

The Cascade Brewery is located in South Hobart, near the natural spring waters of Mount Wellington. The Hobart surrounding area has many vineyards, including Moorilla Estate at Berriedale.

Nationally known bootmaker Blundstones is based in Moonah in the northern suburbs. National lottery company Tattersalls was founded by George Adams in Hobart but is now based in Melbourne.

Hobart from the Eastern Shore

Hobart is the second-oldest city in Australia (after Sydney). Amid British concerns over the presence of French explorers, the first settlement was started in 1803 as a penal colony at Risdon Cove on the eastern shores of the Derwent River. In 1804 it was moved to a better location at the present site of Hobart at Sullivan's Cove. The area's original inhabitants were members of the semi-nomadic Mouheneer tribe. A series of bloody encounters with the Europeans and the effects of diseases brought by the settlers forced away the aboriginal population, which was rapidly replaced by free settlers and the convict population.

Charles Darwin visited Hobart Town in February 1836 as part of the Beagle expedition. He writes of Hobart and the Derwent estuary in his Voyage of the Beagle

...The lower parts of the hills which skirt the bay are cleared; and the bright yellow fields of corn, and dark green ones of potatoes, appear very luxuriant... I was chiefly struck with the comparative fewness of the large houses, either built or building. Hobart Town, from the census of 1835, contained 13,826 inhabitants, and the whole of Tasmania 36,505.

But since the Derwent River was one of Australia's finest deepwater ports and was the centre of the Southern Ocean whaling and seal trade, it rapidly grew into a major port, with allied industries such as ship-building. Hobart Town became a city in 1842, and was renamed Hobart in 1875.

Hobart is internationally famous among the yachting fraternity as the finish of the Sydney to Hobart Yacht Race which starts in Sydney on Boxing Day (the day after Christmas Day). The arrival of the yachts is celebrated as part of the Hobart Summer Festival, a food and wine festival beginning just after Christmas and ending in mid January.

Hobart is the finish point of the Targa Tasmania rally car event held annually in April since 1991.

Australia's first legal casino was the 17-storey Wrest Point Hotel Casino in Sandy Bay, opened in 1973. It is still the tallest building in the city, despite being several kilometres out of the CBD, and a nationally recognised icon.

Popular restaurant strips include Elizabeth Street, in North Hobart and Salamanca Place near the waterfront. These include a large number of ethnic restaurants including Chinese, Thai, Greek, Italian, Indian and Mexican. Several pubs and nightclubs can be found concentrated in the city and waterfront area.

Hobart is home to Australia's oldest theatre, the Theatre Royal. It also has three Village Cinema complexes, one in the city, and two relatively new centres in Glenorchy and Rosny.

Hobart's major newspaper is The Mercury, which was founded by John Davies in 1854 and has been continually published ever since.

Television broadcasts in the city were restricted to two channels until 1986 - TVT-6 and the ABC. In 1986, multicultural broadcaster SBS began transmission to the city.

In 1994 market aggregation allowed Launceston based station (now Southern Cross) to broadcast to Hobart as well. TVT-6 (since known as TasTV, now WIN Television) took on a Nine Network affiliation, with Southern Cross carrying both Seven and Ten programming.

All stations commenced digital broadcasting during 2003, and in December 2003, a fifth station, Tasmanian Digital Television (TDT) began broadcasting. TDT is a joint venture between Southern Cross and WIN.

Due to Tasmania's heavily distributed population, most Hobart sporting teams in national competitions are state-wide teams. These include the Tasmanian Tigers cricket team, which plays home games at Bellerive Oval on the eastern shore. Despite Australian rules football's huge popularity in the state, Tasmania does not have a team in the Australian Football League. They do have a team (the Tasmanian Devils) in the VFL (Victorian league), and a team in the national league is a popular topic among supporters as well as the state government (one of the potential sponsors of such a team). Some AFL teams play scheduled games at Aurora Stadium (at York Park in Launceston).

Unfortunately Tasmania's small population and low sponsorship potential have resulting in the state not being represented in national basketball, soccer and netball leagues.

Hobart is home to the first campus of the University of Tasmania. The campus is now situated in Sandy Bay. On site accommodation colleges include Jane Franklin Hall, Christ College and St John Fisher College.

Senior secondary colleges in the Hobart are include Hobart College, at Mt Nelson just south of the city; Elizabeth College, in North Hobart; Rosny College and Claremont College, at Rosny on the eastern shore and Claremont in the northern suburbs respectively.

Hobart's passenger rail and tram services closed in the 1950s. Most transport within the city is via the Brooker Highway to the northern suburbs, and Tasman Bridge and Bowen Bridge across the river.