The State of Victoria Australia Information

Victoria is Australia's smallest mainland state in terms of area and is situated in the south-eastern corner of the continent. As of December 8, 2004, the Australian Bureau of Statistics has the population of Victoria reaching 5 million for the first time, thus making it the most densely populated state in Australia.

After the founding of the colony of New South Wales in 1788, the continent was divided into an eastern half - named New South Wales, and a western half, named New Holland, but under the administration of the colonial government in Sydney. Victoria's first settlement was at Portland, on the west coast of what is now Victoria, Melbourne was founded in 1835 by John Batman.

In 1851 gold was discovered at Ballarat, and subsequently at Bendigo. Later discoveries occurred at many sites across Victoria. This triggered one of the largest gold rushes the world has ever seen. Victoria grew rapidly in both population and economic power. The colony was granted independence from New South Wales in the same year.

In 1901 Victoria ceased to be an independent colony and became a state in the Commonwealth of Australia. Melbourne was the capital of Australia while Canberra was under construction.

Historically and to some extent in contemporary times, Victoria has been home to gold mining and brown coal mining and offshore oil drilling.

Outside the manufacturing and service centre of Melbourne, agriculture dominates the Victorian economy, with its comparatively rich soils and temperature and wet climates compared to the rest of Australia. Major export agricultural activities include beef and dairy cattle, wool and lamb production and wheat (primarily in the drier western half of the state), with irrigated fruit and vegetable growers around Melbourne and along the Murray River. Wine grape production grew rapidly during the 1990s. 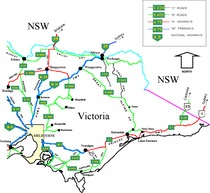 Victoria's northern border is the southbank of the Murray River, the river itself being part of New South Wales. It also rests at the southern end of the Great Dividing Range, which stretches along the east coast and terminates near Ballarat. It borders South Australia to the west. In this space are topographically, geologically and climatically diverse areas ranging from the wet, temperate climate of Gippsland in the southeast to the snow-covered Victorian alpine areas which rise to almost 2000 m (with Mount Bogong the highest peak at 1986 m) and extensive semi-arid plains to the west and north-west. The state's capital, Melbourne, contains approximately 70% of the state's population and dominates its economy, media, and culture. For other cities and towns, see List of localities (Victoria) and Local Government Areas of Victoria. Victoria is generally regarded as the home of Australian Rules Football, with 10 of the 16 clubs of the major league (see Australian Football League) based in Victoria, and the traditional Grand Final held at the Melbourne Cricket Ground.