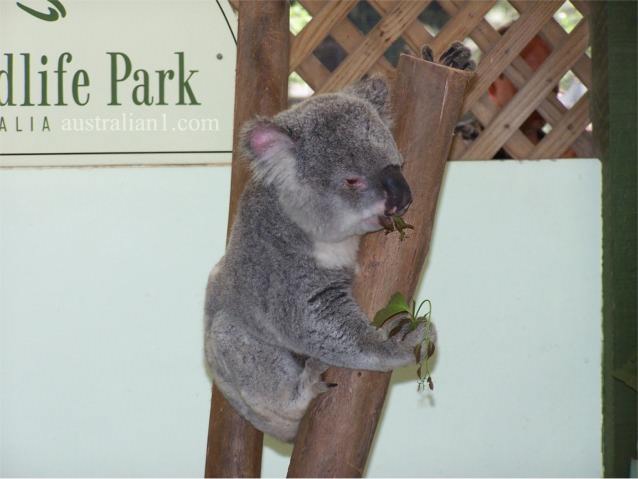 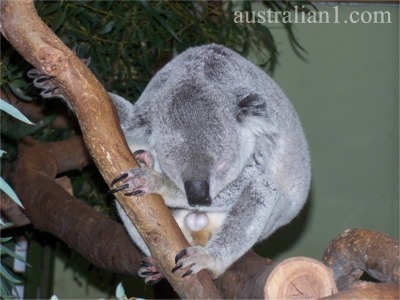 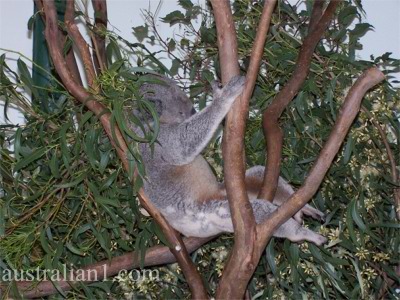 The Koala (Phascolarctos cinereus; sometimes also spelled Phascolarctus cinereus) is a thickset arboreal marsupial herbivore endemic to Australia, and the only representative of its family, Phascolarctidae. Koalas are unmistakable: they are broadly similar in appearance to a wombat (which is their closest living relative) but have a thicker, softer coat, much larger ears, and longer limbs, which are equipped with large, sharp claws to assist with climbing. Weight varies from about 14 kg for a large, southern male, to about 5 kg for a small northern female. They are generally silent, but male Koalas have a very loud advertising call (a nasal snort that human children delight in imitating) that can be heard from almost a kilometer away during the breeding season.

Koalas are found all along the eastern coast of Australia from near Adelaide to the base of the Cape York Peninsula, and as far into the hinterland as there is enough rainfall to support suitable forest. The Koalas of South Australia were exterminated during the early part of the 20th century, but the state has since been repopulated with Victorian stock.

Although three subspecies have been described, these are arbitrary selections from a cline and are not generally accepted as valid. Following Bergmann's Rule, southern individuals from the cooler climates are larger. A typical Victorian Koala (formerly P. cinereus victor, see illustrations) has longer, thicker fur, is a darker, softer grey, often with chocolate-brown highlights on the back and forearms, and has more a more prominently light-coloured ventral side and fluffy white ear tufts. Typical weights are 12 kg for males and 8.5 kg for females. In tropical and sub-tropical Queensland, however, Koalas are smaller (at around 6.5 kg for an average male and just over 5 kg for an average female), a lighter, often rather scruffy, grey in colour, and have shorter, thinner fur. Queensland Koalas were previously classified as the subspecies P. cinereus adustus, and the intermediate forms in New South Wales as P. cinereus cinereus. The variation from one form to another is continuous, and there are substantial differences between individual Koalas in any given region.

Koalas live almost entirely on eucalyptus leaves. This is likely an evolutionary adaptation that takes advantage of an otherwise unfilled ecological niche, since eucalypt leaves are low in protein, high in indigestable substances, and contain phenolic terpene compounds that are toxic to most species. Like wombats, Koalas have a very low metabolic rate for a mammal (which conserves energy) and they rest motionless for about 20 hours a day, sleeping most of that time. They feed at any time of day, but usually at night. An average Koala eats a half-kilogram of eucalyptus leaves each day, chewing them in their powerful jaws to a very fine paste before swallowing. The liver deactivates the toxic components ready for excretion, and the hind gut is greatly enlarged to extract the maximum amount of nutrient from the poor quality diet. Much of this is done through bacterial fermentation: when young Koalas are being weaned, the mother passes unusually soft faeces rich in these bacteria to pass these essential digestive aids onto her offspring.

Koalas will eat the leaves of a wide range of gum trees, and even some exotic species, but they have firm preferences for particular varieties, which vary from one region to another: in the south Mana Gum, Blue Gum and Swamp Gum are favoured; Grey Gum and Tallowwood are important in the north, and the ubiquitous River Red Gum of the isolated seasonal swamps and watercourses that meander across the dry inland plains allows Koalas to exist in surprisingly arid areas. Of the over 120 species of gum trees, only about 20 are not poisonous to Koalas.

Female Koalas are solitary and occupy distinct home ranges that they rarely leave. In the more fertile areas, these ranges overlap; in areas where suitable food trees are scarce they tend to be larger and more exclusive. Males are not territorial, but do not tolerate one another, particularly not during the breeding season: dominant individuals attack subordinate ones, and most adult males carry scars on their face, ears and forearms as a result.

Koalas are almost entirely arboreal. They do not make nests, simply sleep in a tree fork or on a branch. They climb using their powerful claws for grip, usually quite slowly but rapidly at need, and will leap confidently from one tree to another if they are reasonably close together. Longer distances are traversed on the ground in a slow but effective waddle. If threatened, Koalas break into a surprisingly athletic gallop, heading for the nearest tree and bounding up it to a safe height; then waiting, with the endless patience of a creature that routinely sleeps for 18 hours a day, for the intruder to go away.

Females reach sexual maturity at two years of age and, if healthy, will produce one young each year for about 12 years. Gestation is 35 days; twins are very rare. At birth, the tiny young crawls into the downwards-facing pouch on the mother's belly (which is closed by a drawstring-like muscle that the mother can tighten at will) and attaches itself to one of the two teats. Young remain hidden in the pouch for about six months, and leave it permanently after 7 months. They remain with the mother for another six months or so, riding on her back, and feeding on both milk and gum leaves until weaning is complete at about 12 months of age. Young females disperse to nearby areas at that time; young males often stay in the mother's home range until they are two or three years old.

Although the Koala was hunted almost to extinction in the early 20th century, largely for its fur, conservation programs since then have succeeded in increasing populations substantially—to the point where large numbers of Koalas in some isolated areas where migration is not possible have needed to be culled or translocated, or else just left to destroy all food trees and then starve. Some colonies have been hard hit by disease, especially chlamydia.

Because of their appealing teddy bear appearance, koalas (like the Big Red and Eastern Grey Kangaroos) have a disproportionate conservation status: they are far more secure than many other Australian bird and mammal species, and commonly coexist with humans so long as their food supplies are ample. Nevertheless, Koalas occupy a more restricted range than formerly, and do require large areas to roam in. They are fairly solitary, nomadic creatures, and travel long distances along tree corridors in search of new territory and mates. The ever-increasing human population of the continent continues to cut these corridors for agricultural and residential development, forestry and road-building, marooning Koala colonies in decreasing areas of bush.

The Koala's scientific name comes from the Greek: phaskolos meaning "pouch" and; arktos meaning "bear". The cinereus part is Latin and means "ash-colored". Some people refer to the Koala as a Koala Bear—this is incorrect, they are unrelated.

In popular Western culture, the animal is usually either depicted as a cuddly innocent, or as a curmudgeony character never terribly impressed by the things he sees around him. Qantas airlines used a koala who continually complains about the airline's reliability in a series of television commercials.