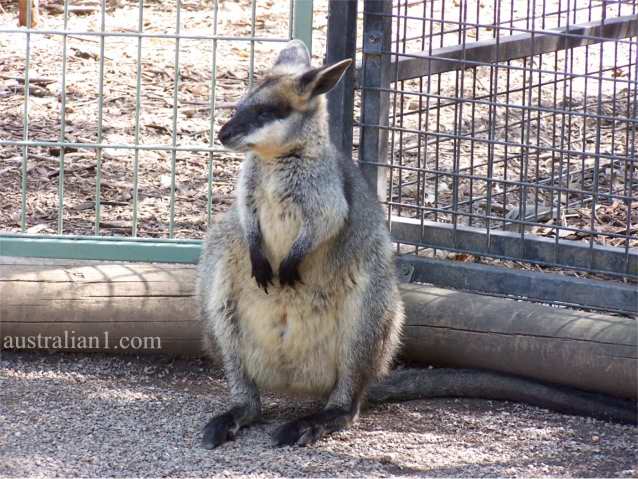 There appears to be a mix of Wallaby (small size) and Wallaroo (intermediate size animals) in the bottom photograph. There may or may not be a Kangaroo (large size). The one in the very front looks to my untrained eye like a small Kangaroo. 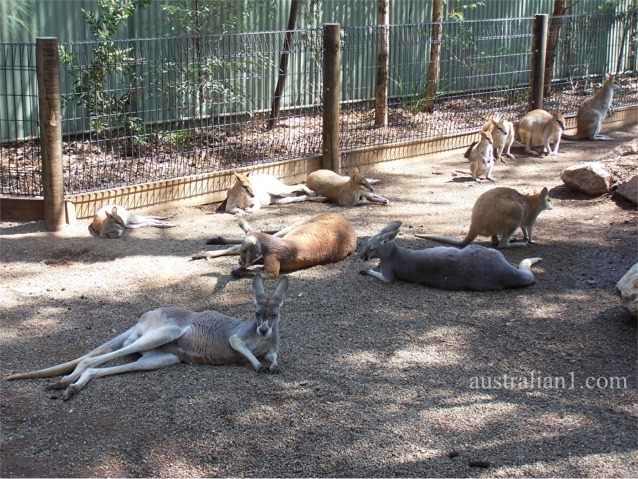 A wallaby (sometime (erroneously?) spelt wallabee) is any of about 30 species of macropod. Essentially, a wallaby is any macropod that isn't considered large enough to be a kangaroo and has not been given some other name. There is no fixed dividing line. In general, a wallaby is smaller and has a stockier build than a kangaroo. Very small forest-dwelling wallabies are known as pademelons.

Wallabies are widely distributed across Australia, particularly in more remote, heavily timbered, or rugged areas, less so on the great semi-arid plains that are better suited to the larger, leaner, and more fleet-footed kangaroos.

Like possums, wallabies are not a distinct biological group. Nevertheless they fall into several broad categories. Typical wallabies like the Agile Wallaby, the Black Wallaby and the Red-necked Wallaby are most closely related to the kangaroos and, size aside, look very similar. These are the ones most frequently seen, certainly in the southern states.

Rock wallabies, rather like the goats of the northern hemisphere, specialise in rugged terrain and have modified feet designed to grip rock with skin friction rather than dig into soil with large claws. There are at least 15 species and the relationship between several of them is poorly understood. Several are endangered. Captive rock wallaby breeding programs like the one at Healesville Sanctuary have had some success and a small number have recently been released into the wild.

The Banded Hare Wallaby is thought to be the last remaining member of the once-numerous subfamily Sthenurinae, and although once common across southern Australia, is now restricted to two islands off the Western Australian coast which are free of introduced predators.

The three nailtail wallabies (one extinct) and the four typical hare-wallabies make up another group, and New Guinea, which was until fairly recent geological times a part of mainland Australia, has at least 5 species of New Guinea forest wallaby.

As mentioned above, the term wallaby is ill-defined and can mean just about any macropod of moderate size. In consequence, the listing below is arbitrary. For a comprehensive list, see macropod.