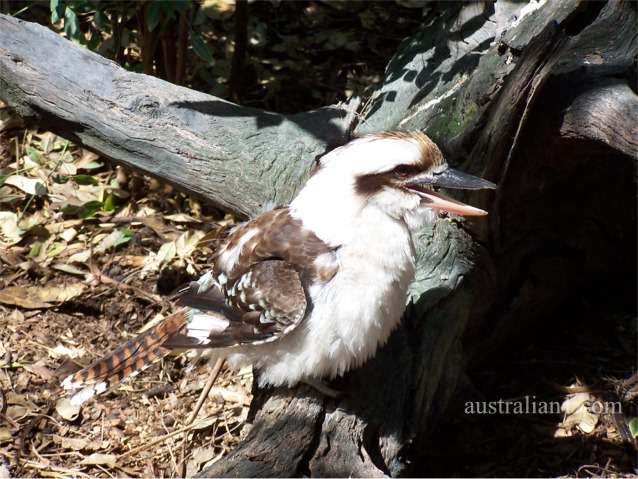 Kookaburras occupy woodland territories in loose family groups, and their laughter serves the same purpose as a great many other bird calls: to demarcate territorial borders. It can be heard at any time of day but most frequently shortly after dawn, and especially when the colour drains from the forest after sunset.

One bird starts with a low, hiccupping chuckle, then throws its head back in raucous laughter: often several others join in. If a rival tribe is within earshot and replies, the whole family soon gathers to fill the bush with ringing laughter. Hearing kookaburras in full voice is one of the most extraordinary experiences of the Australian bush; something even locals cannot ignore, and that visitors, unless forewarned, can be quite terrified by.

Kookaburras hunt much as other kingfishers (or indeed robins) do: by perching on a convenient branch or wire and waiting patiently for prey to pass by: mice and similar-sized small mammals, large insects, lizards, small birds and nestlings, and most famously, snakes. Small prey are preferred, but kookaburras not infrequently take surprisingly large creatures, including venomous snakes a good deal longer than the bird itself.

The Laughing Kookaburra is a handsome, stocky bird of about 45 cm in length, with a large head, a prominent brown eye, and a very large bill. It is found throughout eastern Australia, and have been introduced into the south-west corner of Western Australia, Tasmania, Flinders Island, Kangaroo Island, and New Zealand.

The Blue-winged Kookaburra is a little smaller at around 40 cm long, has a light-coloured eye, no dark eye-mask, and many more blue wing feathers. It is restricted to southern New Guinea and the moister parts of northern Australia, from southern Queensland across the Top End, and as far down the Western Australian coast as the Shark Bay area.

Unusually for close relatives, the Laughing and Blue-winged species are direct competitors in the area where their ranges overlap. This suggests that the two species, though having common stock, evolved in isolation (possibly during a period when Australia and New Guinea were more distant — see Australia-New Guinea) and were only brought back into contact in relatively recent geological times.

The Rufous-bellied Kookaburra (Dacelo gaudichaud) is unusual in that it occupies dense rainforests (as opposed to the open country prefered by other kookaburras) and does not live in family groups but in pairs. A white-billed bird with a black cap, blue-tinged wings, and a pale rufous belly and tail feathers, it is widely distributed through the lowland forests of lowland New Guinea.

The little known but spectacular Spangled Kookaburra (Dacelo tyro) is found only on the Aru Islands and the savannahs of southern New Guinea. It has bright blue wings and tail, a white chest and belly, dark eyes, and a striking white-spotted black head. Practically nothing is known of its family life or breeding biology.