Welcome to our Darwin NT Australia Street map page. The street map of Darwin Northern Territory Australia that is located below is provided by Google Maps. You can "grab" the Darwin NT street map and move it around to re-centre the map. You can change between standard map view and satellite map view using the small square on the bottom left hand corner of the map. Satellite map view utilizes orbiting satellite or aerial high resolution photography to display images of the map location to street level detail (really quite amazing). Standard map view shows a traditional street map sometimes called a road map. You can use the zoom buttons on the bottom right hand side of the map to zoom in or out to street level detail. We have maps for most Australian towns and cities, so click on the Australian Maps link to see more Australian maps.

I hope you like the Darwin, NT, Australia street map / road map situated above.

If you like our website, please consider adding a link to the site. These links help to build website traffic and they are considered a vote of confidence for a site.

I travelled extensively for 10 to 15 years trading campervans and motorhomes. I travelled in busses, ferries, planes, trains or taxis when picking up vehicles and after delivering them to customers. Mapping was very important to me. I often relied upon my smartphone, tablet or dedicated GPS navigation device to provide real-time point to point GPS routing. I drove many long hours in all sorts of weather conditions. I slept in the trade vehicles while transporting them from one location to the next. I saw the wonderful countryside as many others would never see it. I visited cities and towns and I stopped at many wonderful tourist attractions. I ate meals in eateries and I explored the land.


A Map of the Northern Territory
of Australia 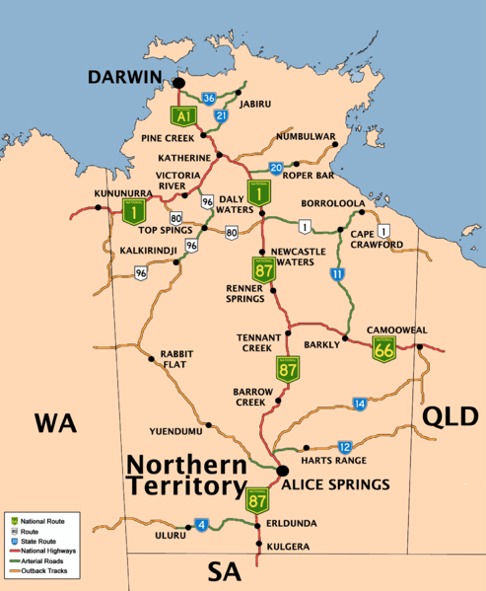